As a result of our success with our BBC Blue Peter project advertised on our website, Thameside was approached by Fever Media, a television recording company, to further investigate Wheelchair Dancing. The director visited our class at Kingsdown School, where we were practicing for the annual competition in Cuijk and we were able to demonstrate the principles of Duo and Combi dancing. We met him again in Holland at the competition, where he was able to observe Combi dancing at International level. It was here that he announced that Fever Media had secured a contract with BBC 3 to present. 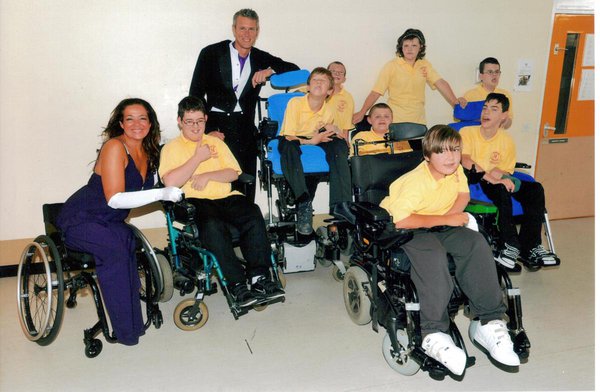 In October Fever Media returned to Kingsdown with Diana Morgan and Mark Foster, Olympic swimmer and celebrity dancer in Strictly Come dancing. Mark and his wheelchair dance partner, Diana, are competing in the new BBC 3 show, Dancing on Wheels. There was great excitement when they demonstrated their new skills with a tango, in full evening dress with cameras. After the demonstration the children enjoyed the presence of Diana and mark about the school with interviews and cameras. Another first for the children of Kingsdown School.

Margaret and I were lucky enough to attend some rounds and the final of the competition. It was marvellous!