Blessing of the New Jumbulance

In March Margaret and I were invited to Harpenden for the blessing of another new Jumbulance. Although we allowed what we thought would be plenty of time, it appeared that the whole town had turned out and parking was impossible. We only had a quick glimpse of the coach as we rushed to the service. The church was packed with members, users, associations and local supporters. The service also included the blessing of a beautiful banner to be carried aboard Jumbulance coaches, when visiting Lourdes. It had been designed and embroidered by inmates at one of Her Majesty’s Prisons. 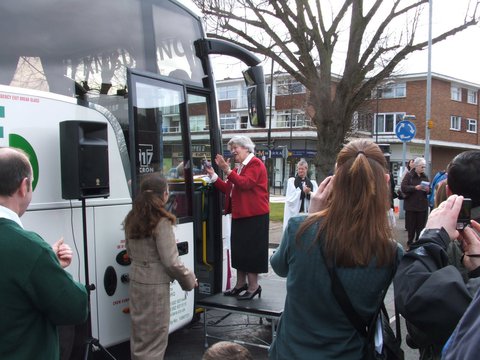 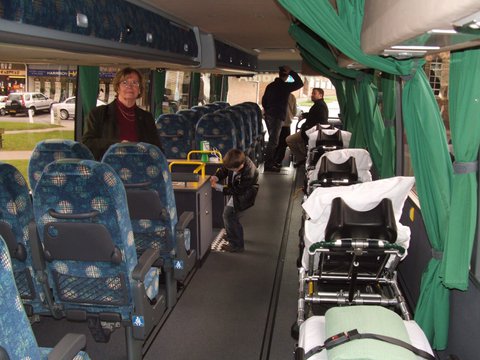 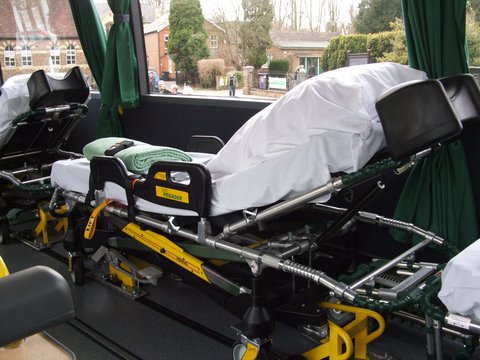 The service concluded with everybody going outside to complete the blessing and official opening of the Jumbulnce.

We were lucky enough to be introduced to Brendan, the driver who would be taking us on our next trip to Holland and who gave us a tour of the coach. It is truly magnificent and with so much more space than the one we normally use. It has fixed seats, reclining seats, anchors for people travelling in their wheelchairs and adjustable reclining cots for those with more severe disabilities. There is a large toilet with supports and sufficient space for assistance. It comes equipped with a galley, including sink, cooker, fridge, freezer, and microwave for the longer journeys. Below the main deck there is ample storage space for spare chairs and luggage. We look forward to using it in the future. Later, during the lunch reception we met lots of other user groups and members of the Trust. It was nice to put faces to names that we have worked and associated with over the past two years. Others were interested in what we had achieved, having seen our reports in the Jumbulance news letters.

In all, it was a very special day and we were pleased to have been invited to take part. Soon we shall be busy booking next years trips to Holland.